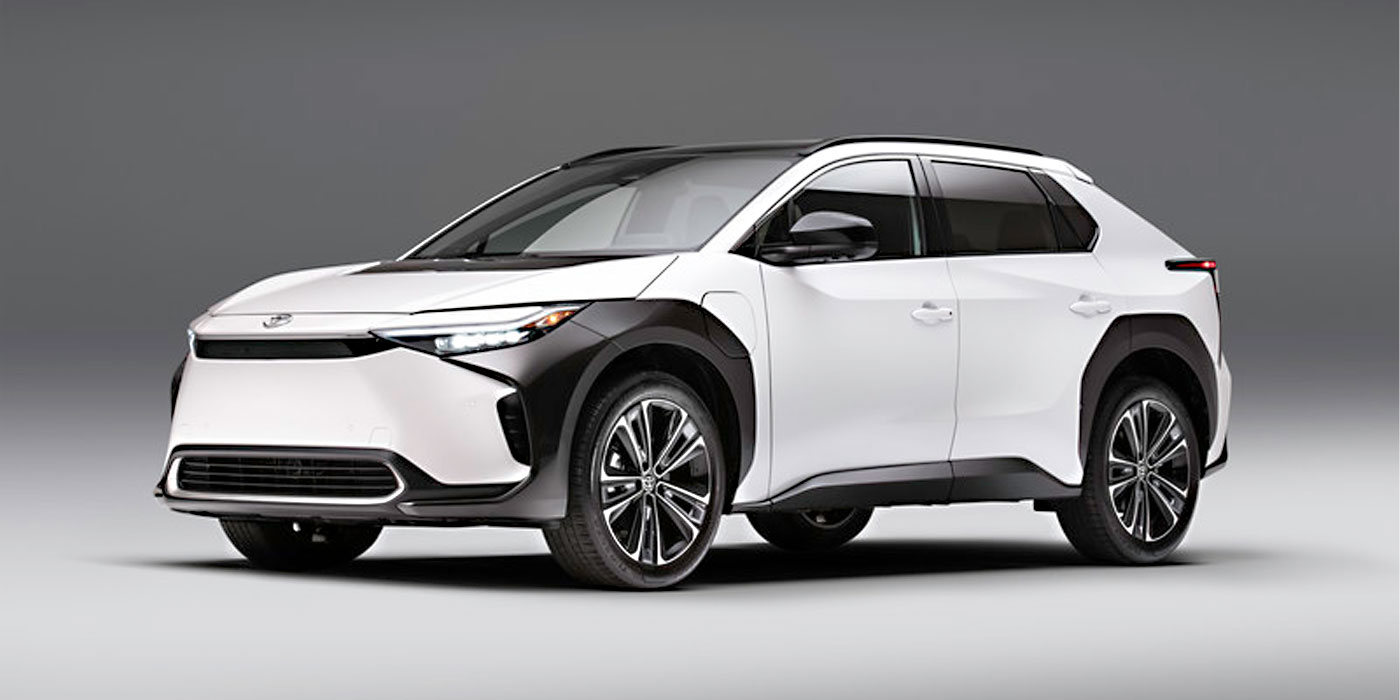 The bZ4X joins a lineup of Toyota electrified vehicles that account for more than 24% of Toyota’s total U.S. sales volume.

Toyota‘s all-electric bZ4X U.S. production model has made its debut, representing the first of a global series of battery-electric vehicles to be introduced under the global “Toyota bZ” brand umbrella. Once the rubber hits the road, the bZ4X will have a manufacturer-estimated range of up to 250 miles for XLE front-wheel-drive models.

The bZ4X joins a lineup of Toyota electrified vehicles that account for more than 24% of Toyota’s total U.S. sales volume. These include hydrogen fuel cell electrics, hybrids, plug-in hybrids and battery electric vehicles. Toyota plans to expand to around 70 electrified models globally by 2025. This future lineup will feature 15 dedicated BEVs, including seven carrying the bZ (Beyond Zero) brand moniker. This portfolio of electrified products will help propel Toyota toward its goal of carbon neutrality by 2050, the company says.

Built on the BEV-dedicated e-TNGA platform, a first for Toyota, the bZ4X has a high-capacity lithium-Ion battery pack placed flat under the floor, which gives it a low center of gravity.The adoption of a lightweight body structure partially made of high-tensile steel, as well as the enhancement of frame components around the battery pack and the forward and rear suspension, also contributes to the agile responsiveness of bZ4X, Toyota says. In addition, a redesigned accelerator pedal creates a smoother feel when accelerating and decelerating, coupled with an intelligent throttle with slip suppression to provide impressive control on slippery roads. And, Toyota says when you combine that with a new AWD system with X- MODE, an available standout feature for bZ4X and a Toyota first, drivers get a driving experience suited for everything from daily driving to light off-roading. Another feature of the AWD system is Grip-Control, which leverages motor drive characteristics to achieve capable off-road performance.

The engineering team also focused on features that maximize energy-saving and cruising range for year-round driving (particularly in winter settings). The following systems and equipment were adopted to reduce energy consumption, especially power used for heating in cold climates:

Toyota says engineers had a high consideration for overall driving range, particularly in cold climates, and targeted a battery capacity retention of 90% after 10 years of ownership. In terms of battery safety, Toyota includes a non-conductive coolant that runs through separated flow channels to maintain optimal battery temperature. The battery pack housing is designed to withstand a collision from any angle due to its frame and cross-bracing design.

bZ4X will be the first to feature the latest Toyota Safety SenseTM safety package (TSS 3.0). This system has been improved by expanding the detection range of the millimeter-wave radar and monocular camera. Toyota says the Pre-collision system has been improved to offer Low-Light Cyclist Detection, Daytime Motorcyclist Detection and Guardrail Detection. Also, lane recognition is enhanced to add improved functionality while in Lane Tracing Assist mode.

With a Drive Connect trial or subscription, the bZ4X offers navigation that uses map information from the cloud to obtain traffic information and parking space availability in real-time. Digital key gives owners the ability to lock, unlock and start the vehicle with a tap of a smartphone. Other features of the trial subscription include BEV specialized services such as charging station info, driving support info and vehicle driving range.

Other notable features include:

Advertisement
In this article:CUVs & SUVs, Toyota