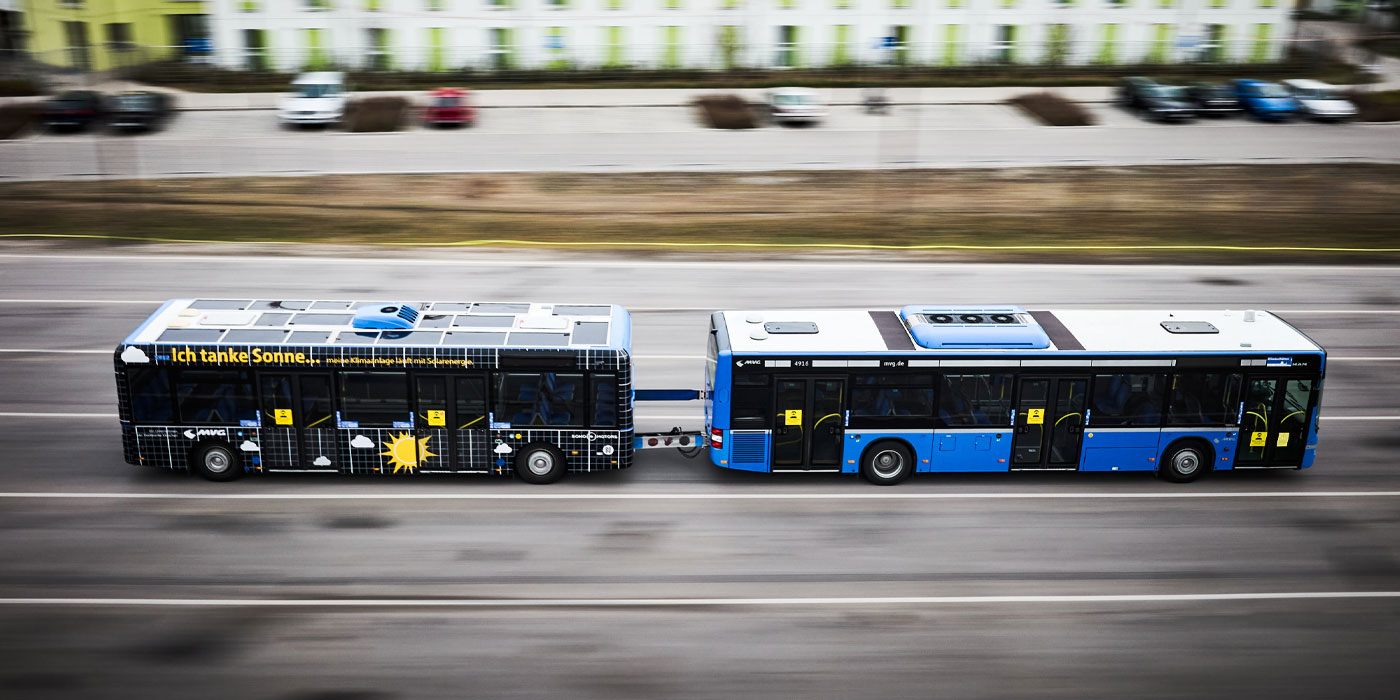 Sono Motors is launching its proprietary solar technology to public transport for the first time in partnership with the Münchner Verkehrsgesellschaft (Munich Transport Company, MVG). The solar bus trailer will hit the roads in the Munich, Germany metropolitan area in the near future, testing the energy yields as well as the potential of the technology in daily operation. The company says the technology can offer a possible savings of up to 2,500 liters (approx. 660 gallons) of diesel per year and an annual local CO2 saving potential of more than 6.5 metric tonnes per bus.

The technology uses 20 semi-flexible special photovoltaic (PV) modules that provide over 2,000 watts to power the vehicle’s battery and electrical loads such as heating, ventilation, and air conditioning, as well as the trailer’s steering system.

The CO2 saving potential of solar-powered vehicles and their contribution to urban air pollution control and climate protections are promising, Sono Motors says. For a medium-sized fleet of around 300 buses, the company says calculations show the possibility of savings of up to 2,000 metric tonnes of CO2 per year. Further increases are conceivable in the future, as both the solar cells and the power electronics are expected to become more efficient. This solar solution’s so-called ‘CO2 backpack’, i.e., emissions caused in production, amounts to a one-off of approximately 1.5 metric tonnes of CO2 per bus or bus trailer and could be offset after a short runtime of just less than one year, the company says.

The solar technology was developed and tested specifically for use on buses. Due to the ultra-fast optimization in the millisecond range and the multi-channel system, the company says the PV yields can be transferred to the battery of the bus in the best possible way. The modules cover a total area of 12 square meters and supply the 24V battery with over 2,000 watts. In this case, the solar energy generated in this way is used to operate the HVAC system (heating, ventilation, air conditioning) and to support the trailer steering system. In addition to saving diesel, the additional electricity ensures the stabilization of the battery’s energy supply, thus extending its service life and reducing maintenance costs. The energy generated can be monitored online using the integrated software.