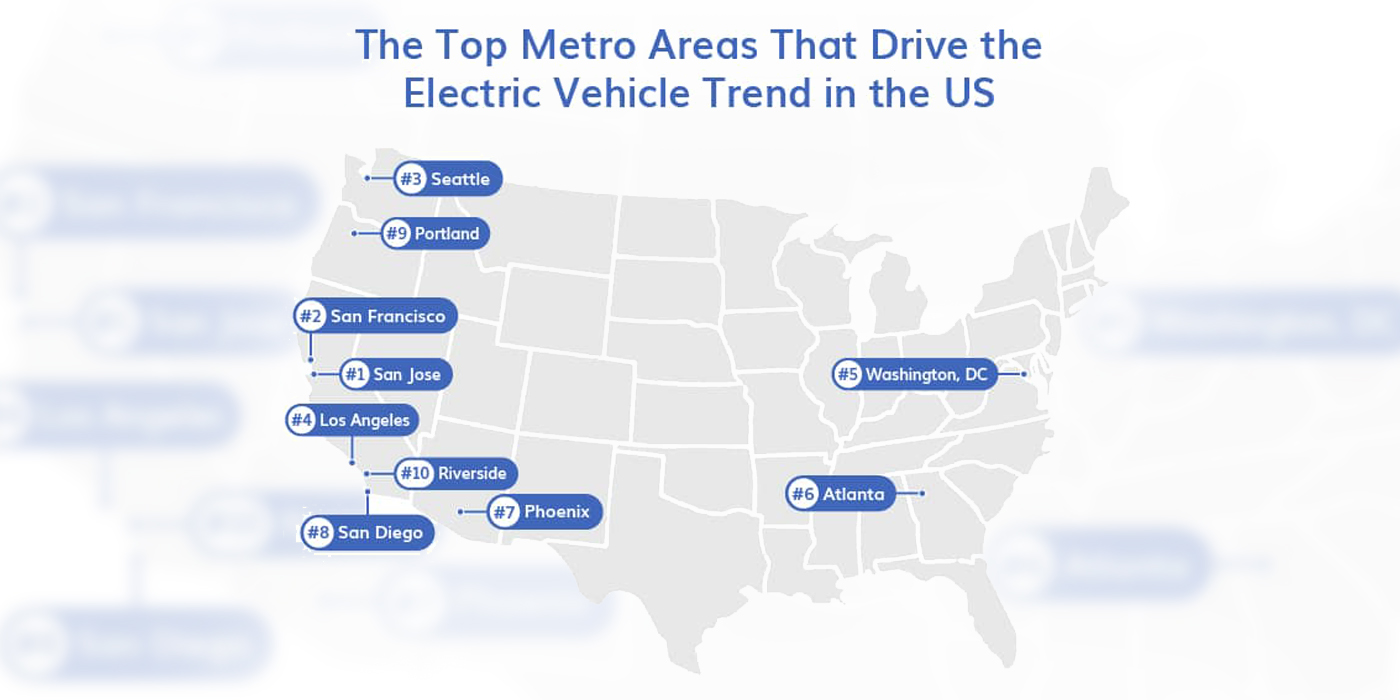 Metropolitan areas’ scores were based on 14 key metrics, such as the number of EVs owned, EV infrastructure and the cost of an eGallon.

As the push for electric transportation in the U.S. grows, some cities are racing to become more EV-friendly. For example, Denver is currently emerging as a top hub for electric vehicles – there are about 545 charging stations in Denver, landing the metro area the 13th spot for overall EV infrastructure. The metro area claims the 16th-highest number of EVs in the country (approx. 17,650 electric cars). Denver also has third-most apartment units (8.6%) in rental buildings fitted with charging stations.

So what are the other top cities? How much evidence is there for a rush toward increases in the usage of electric vehicles?

In a recent study, Storage Café set out to investigate which metros are best suited to cater to the EV mindset. The group scored metropolitan areas based on 14 key metrics, such as the number of EVs owned, EV infrastructure including public and residential charging stations, the cost of an eGallon and dedicated HOV and HOT lanes for EVs.

As the financial and cultural center of Silicon Valley, the study shows the San Jose metro area is the ultimate electric car hotspot. Palo Alto in particular, which has been nurturing Tesla for quite some time now, serves as the hotbed of eco-friendly driving. The study shows San Jose claims not only the third-highest number of EVs in the country (approx. 74,000 electric cars), but also the third-largest number of EV charging stations (approx. 1,550), per Alternative Fuel Data Center data provided by the U.S. Department of Energy. San Jose also leads the way when it comes to the number of charging stations related to its population, with about 2.4 of them per 1,000 households, higher than the national average of 0.3 EVs/1,000 households.

With its tech-heavy industry and strong motivation to go green, San Francisco stands out as the second-best city for electric cars in 2021. Much like San Jose, electric vehicles are a common sight in the Bay Area. In fact, the metro boasts about 122,400 EVs, making The City by the Bay the second city based on its number of electric cars. Besides the federal and state efforts to promote the adoption of EVs, San Francisco also offers its residents incentives to go for greener vehicles through the “Clean Cars for All” grant program.

With over 2,500 public charging stations, the San Francisco metro is second only to San Jose when population is factored in, with about 1.5 chargers/1,000 households.

“I am relatively optimistic that we will see increasing penetration of EVs in the marketplace over the next decade with it becoming the dominant drivetrain for new car sales by 2030,” says Michael Lenox, Ph.D., Tayloe Murphy professor of business administration, University of Virginia, Darden School of Business. “The cost trajectory of batteries, which is the primary driver of the price of EVs, is such that EVs may become less costly than internal combustion engines by mid-decade. At this point, EVs will be preferable on the current dimensions of merit.”

Study reveals most EV-friendly metro areas in the U.S.