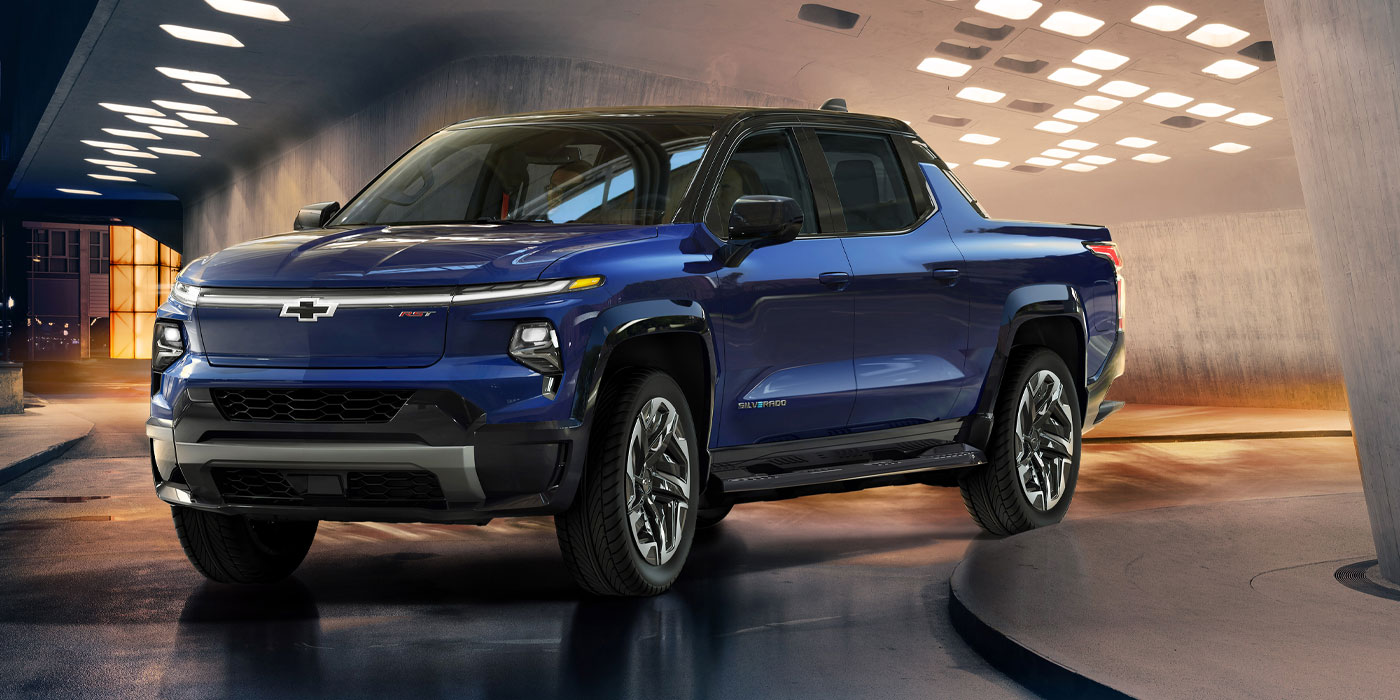 At launch, the Silverado EV will be available in two configurations, an RST First Edition and a fleet-oriented WT model, each offering a comprehensive suite of standard and available safety technologies.

We finally have a good look at Chevrolet’s 2024 Silverado EV – the reimagining of the brand’s best-selling nameplate. Revealed during this year’s CES show, the truck offers:

Developed from the ground up as a fully-electric truck on GM’s advanced Ultium EV Platform, the company says the Silverado EV offers a combination of capability, performance and versatility, along with advanced technologies that can evolve the vehicle over time.

At launch, the Silverado EV will be available in two configurations, an RST First Edition and a fleet-oriented WT model. GM says each will offer a comprehensive suite of standard and available safety technologies.

The WT will launch first for fleet customers and offer 510 HP and 615 lb.-ft. of torque. The WT will offer 8,000 lbs. of towing and 1,200 lbs. of payload. After initial launch, Chevrolet will introduce a fleet model with up to 20,000 lbs. max trailering with the max tow package.

The Silverado EV harnesses the power of the Ultium Platform, which is the foundation of GM’s EV strategy and the driver of the company’s vision for a zero-emissions future.

A new body architecture, which leverages the available 24-module Ultium battery pack as a part of the fundamental structure, enables the vehicle’s range, GM says. Additionally, the chassis is designed with independent front and rear suspensions, with power transferred to the available 24-in. wheels on RST via front- and rear-drive motors that compose the e4WD system. Automatic Adaptive Air Suspension enables the vehicle to be raised or lowered up to 2 in. (50mm).

The RST and WT feature public DC fast charging capabilities of up to 350kW enabling approximately 100 miles of range to be added in 10 minutes based on GM estimates.

With the growing North American network of chargers and the Energy Assist feature in the myChevrolet Mobile App, drivers can create energy-efficient route planning even while trailering. RST owners also have access to Ultium Charge 360, GM’s approach to EV charging, which the company says is designed to simplify the overall charging experience, including access to more than 100,000 publicly available charging points in the U.S. and Canada. WT customers have access to Ultium Charge 360 Fleet Service.

The truck’s front-end design has been sculpted to efficiently direct air down the body side, significantly reducing drag and turbulence. As a result, the Silverado EV WT is estimated to have one of the lowest drag coefficients of any available production full-size pickup truck, the company says.

The Silverado EV will be offered exclusively in Crew Cab models, with a shorter front overhang. The second row is pushed rearward, meaning passengers over 6 feet tall will be comfortable no matter where they sit.

Customizable first-row storage on both RST and WT models makes the most of the interior space and provides functional solutions for a variety of customer needs. The eTrunk – a lockable, weatherproof compartment in the front of the vehicle – provides enough space to fit a large hardside suitcase and a multitude of accessory options for both fleet and retail customers to load gear.

The RST’s modular console features a capacity of just over 7 gallons, meaning a lunch cooler can easily fit inside, GM says. The RST features a fixed-glass roof, which offers expansive visibility, increased headroom and is intended to offer an enhanced experience for both front and rear passengers.

On the RST, the storage capacity of the 5-ft.-11-in. bed is maximized thanks to the available Multi-Flex Midgate, which provides just over 9 ft. of storage between the cab and the tailgate when the Midgate is open.

A 40/60 second-row seat offers four configurations that allow users to haul gear or equipment while still accommodating a passenger in the second row. With the addition of the available Multi-Flex Tailgate, the Silverado EV RST enables up to 10 ft., 10 in. of load floor and storage capability. An available tonneau cover allows items such as lumber or a kayak to be loaded into a fully lockable, weatherproof storage compartment.

As a driver approaches the RST with an enabled cell phone or key fob, a distinctive lighting animation greets them.

Upon entering the vehicle, a 3D animation appears on the RST’s 17-in.- diagonal LCD freeform infotainment screen, which is paired with a neighboring 11-in.-diagonal driver instrument display. With a new, hands-free start, the vehicle turns on automatically after the driver enters with an enabled device, leaving hands free to buckle up and get on the road.

A major enabler of the Silverado EV’s technologies will be the brand’s first application of Ultifi, a new Linux-based software platform. Developed in-house at GM, it separates the vehicle’s software from the hardware to enable rapid and frequent software updates. This will give drivers the opportunity to evolve their vehicles over time, enhancing both the capabilities and accessing cloud services in a flexible and fast way, GM says.

The Silverado EV will be assembled with domestically and globally-sourced parts at GM’s Factory Zero, Detroit-Hamtramck Assembly Center – a facility repurposed and retooled with a $2.2-billion investment devoted to EV production.