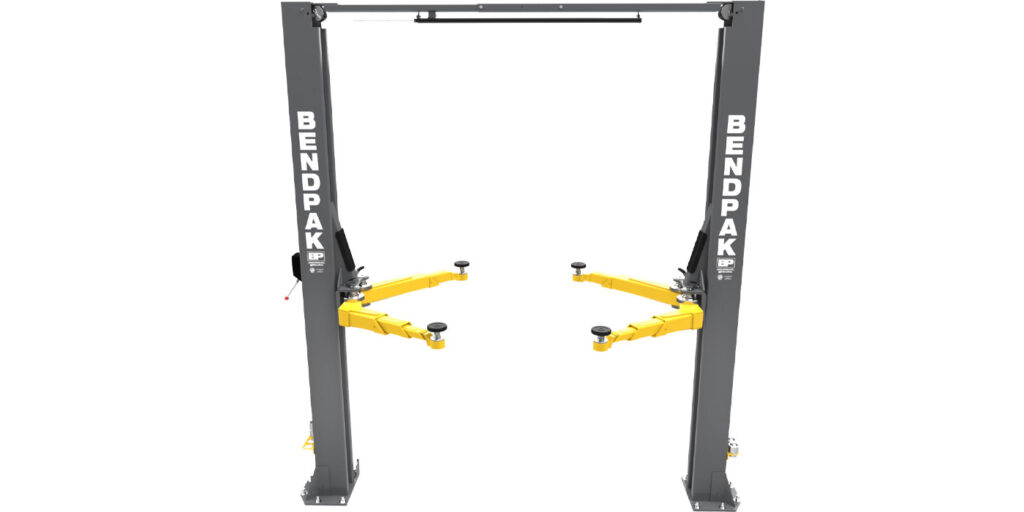 The AP Series features a swing arm design that offers both greater under-vehicle clearance and better extension and retraction to enable technicians to reach the OEM-recommended lift points on more vehicles than previous BendPak products, the company says. The AP Series’ triple-telescoping nested swing arm design lets the inner arms retract fully through the back of the front arm assembly and around the arm pin of the rear arms to maximize retraction and extension. The arms terminate with dropped-end pad receivers that step down even lower. These receivers can accommodate a wide range of stackable adapters and two-stage spin-up screw pads to reach countless lift points, BendPak says.

According to the company, two-post lift swing arm restraints minimize the chance of arms shifting during vehicle loading and service. The company said its Automatic Swing Arm Restraint System (ASARS) prevents dangerous, unplanned movement of the lift arms when raising and lowering the lift, as well as throughout the vehicle service process. The patent-pending design offers twice as much holding grip as traditional systems, with 360 degrees of forged steel teeth securing the arms in place to withstand more than 2,000 lbs. of side force.

Another feature introduced in the AP Series is its automatic safety lock system. The company says this patented system will ensure the safety locks/load-holding devices engage automatically while the lift is going up, and locks will be released for descent with a button. All structural load-holding components are housed within the lift column. The company said this allows for clearer space between lifts when installed side-by-side in tight work bays and streamlines handling, transportation and installation.